PHOENIX — Across Arizona, parents, teachers, schools boards and superintendents are bracing for the a likely walkout as educators pressure state leaders to act on their demands for 20% pay raises and more education money.

On Wednesday, educators in more than 1,000 Arizona public schools are expected to participate in non-disruptive “walk-in” demonstrations as part of the #RedForEd movement.

The demonstrations, which will mostly happen before the start of the school day, are intended to build more support from parents and school administrators.

Organizers with Arizona Educators United, the teacher-led grassroots group that launched the state’s #RedForEd movement, have placed a strong emphasis on the walk-ins’ turnout. Late Monday the organizers said they will move forward with a walkout.

A date is not set, organizers and teacher Derek Harris said in a Facebook video to educators. He told members to prepare for “a long-term walkout” and said teachers should work on getting their school boards and superintendents on board.

“We are still focused on the walk-ins right now,” said Noah Karvelis, a teacher and Arizona Educators United organizer. “But clearly we need escalated action to have our voices heard by our legislators and governor.”

Teachers and their supporters have discussed the possibility of staging a walkout since the #RedForEd movement spontaneously erupted in early March.

Arizona is following West Virginia and Oklahoma, where teachers have publicly revolted over the low pay that ranks them among the worst compensated in the nation and years of cuts to education funding following the recession.

Since early March, Arizona educators have swarmed the state Capitol in protest and threatened to walk out if Gov. Doug Ducey and the Legislature don’t act on their demands for pay raises and the restoration of $1 billion in education cuts.

Organizers have openly threatened a job action out of frustration though they have framed the decision as a last resort.

“We’re going to be as tenacious and fearless as we can be but also operate in the most strategic way possible,” said Noah Karvelis, a teacher and Arizona Educators United organizer. “We’re going to continue balancing the enthusiasm of 40,000 people who seem like they’re ready to do whatever it takes.”

The push from teachers for a walkout seemed to grow following the March 21 teacher sickout that closed nine schools west of Phoenix and again after Oklahoma teachers first walked out April 2.

Some educators on the private Arizona Educators United Facebook page said they were ready to take action. Some seemed frustrated over what they felt was a lack of direction from group organizers or at the thought of potentially losing momentum.

“We think it’s awesome. We’re ready,” Allison Walden, a teacher in the Phoenix Union district, said of the possibility of a statewide walkout.

Walden and her husband, Ian, are both teachers with master’s degrees who each work multiple jobs to support their two kids. Allison Walden said Thursday that the educators’ demands for 20% raises were “life-changing.” 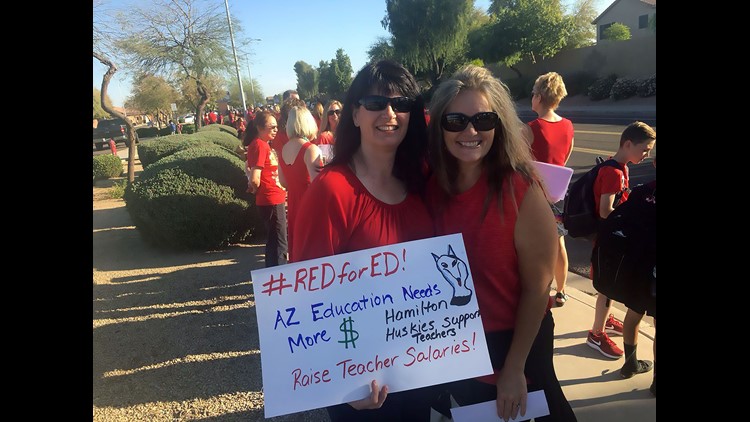 Parents Michelle Dexter, left, and Jill Graham stand with teachers April 4, 2018, before a walk-in at Tarwater Elementary School in the Phoenix suburb of Chandler, Ariz. Their children attend the school.
Lorraine Longhi, The Arizona Republic

“We’d be able to quit our second and third jobs,” Ian Walden said.

Rebecca Garelli, an Arizona Educators United organizer and teacher in Phoenix’s Alhambra Elementary School District, said she understood the frustrations of some teachers. But she told the Facebook group in a March 21 video that Arizona teachers were not yet ready to walk out at that time.

“If we want lasting change to happen, we cannot just pull the trigger,” Garelli said. “It takes careful and adequate planning. We have to create a visual presence. We have to invite our communities to come and learn about what we’re fighting for.”

In the past week, educators have planned walk-in demonstrations and gatherings with parents and community members to make signs and write messages with red paint on their cars calling for more school financing.

The effort to build community support is working, said Garelli, who participated in the 2012 Chicago teachers’ union strike.

“The awareness is finally there. It took us that long to really make ourselves known and make our force known,” she said. “But I feel like the public is finally catching on.”

Organizers have acknowledged their window for action is narrowing.

“I think the time is now,” Garelli said.

The Legislature is expected to adjourn its session in the next few weeks and already is in the midst of budget negotiations. And the academic school year ends in less than two months.

But state testing throws a wrench into the timing because organizers have said they do not want to interfere with students’ exams.

In Pendergast Elementary School District, where the nine schools closed for a day last month as a result of a teacher sickout, educators are petitioning the school board to close down all 12 schools May 2.

Pendergast teachers plan to protest at the Capitol, said Ralph Quintana, a Glendale teacher and president of the Arizona Federation of Teachers.

“I would say among my union members, the desire to move forward and do something more than walk-ins is huge,” Quintana said, adding the Pendergast teachers hope other schools will join them.

The state’s school leaders have mostly been silent about the teacher movement.

Administrators are hoping that teachers don’t walk out of classrooms and that state lawmakers resolve the issue, said Mark Joraanstad, executive director of Arizona School Administrators.

But behind the scenes, superintendents are discussing the logistics of a work stoppage.

► April 2: Teacher strikes show the power of women
► March 30: Teachers are striking all over. What is going on?

They’ve been meeting among themselves and talking to lawyers and school leaders in Oklahoma and West Virginia to figure out legal options surrounding the likely possibility of teachers not accurately reporting their reasons for missing work.

They also are determining how many days they would be willing to support a teacher walkout.

• Oklahoma teachers have been off the job for six school days — and counting.

• In Kentucky, some teachers last week closed their schools and others used their spring breaks to rally at the state Capitol in Frankfort to protect their pensions and the pensions of future hires. Teachers may stage a sickout Friday as the Kentucky General Assembly reconvenes for the final two days of its biennial legislative session.

In Arizona, Joraanstad said he doesn’t know of any superintendents who oppose the #RedForEd movement, adding that most are very sympathetic of frustrations about underfunded schools.

Among the pressing questions for school leaders is whether they would continue to pay classified staffers, such as bus drivers and cafeteria workers, during a walkout. These employees are paid hourly wages dependent on normal school operations and are likely to “really depend on their paychecks,” Joraanstad said.

Another factor school superintendents are weighing is whether they would have to reschedule missed time to meet Arizona’s requirements for instructional hours.

They are doing their own research, trying to determine whether they would continue to be paid and what job protections they would have if they stage a walkout.

Arizona is one of 28 states — which also include Kentucky, Oklahoma and West Virginia, with right-to-work laws — according to the National Right to Work Legal Defense Foundation that supports such laws. Employees in right-to-work states can’t be compelled to join a union or pay dues if they decide not to join as a condition of keeping their jobs.

The Arizona Education Association is not a union in the same way as, say, the Pennsylvania State Education Association, which collectively bargains for pay and benefits. Arizona’s version lobbies state lawmakers and gives support to teachers in districts, but teachers’ job protections are at the mercy of superintendents and school boards.

“Most superintendents I’m hearing from would like to continue paying teachers” during a walkout, Joraanstad said. “But what would happen in the case of an extended stoppage, I don’t know.”

If educators decide to walk out, “obviously we support our teachers in doing what it is that they need to do,” Simek said. “Our mission is to make sure every child’s potential is a reality, and we can’t do that unless there’s a qualified teacher in the classroom.”

The school board of Mesa Public Schools, the state’s largest district, is expected to vote on a similar letter of support.

District leadership have told Mesa administrators to stay out of teachers’ way as they organize walk-ins and other protests as long as they don’t interfere with instruction, said Joshua Buckley, president of the Mesa Education Association.

“They don’t want to discipline anyone for (activism),” Buckley told teachers during an April 4 meeting at Poston Junior High School. “They want us to advocate for kids.”

But some are concerned about how parents and voters may respond.

Districts such as Mesa are thinking about the November ballot, where parents affected by a possible walkout will be voting on school financing at a local level.

“Anything bigger (than a walk-in) is a tough decision to make,” Buckley told teachers at the meeting. “We have a bond and override in November. And that bond and override are going to fund our schools. We have to make sure that the community understands that anything we do bigger is because we love our schools.”

In Oklahoma, Gov. Mary Fallin signed legislation before to the walkouts that gave teachers raises that averaged 16%, or $6,100. It was the first pay increase for some educators in a decade.

But it fell short of what the state’s largest teachers union demanded: $10,000 pay hikes over three years; $5,000 raises for bus drivers, custodians and other staff; and restoration of more than $100 million in education money cut in the past decade.

Oklahoma teachers continue to hold out for more money.

Arizona and Oklahoma have many parallels. Both rank near the bottom for teacher pay and are right-to-work states.

Part of the reason Oklahoma educators have been able to sustain their walkout is that they continue to have support from many superintendents, school boards and parent groups to keep schools closed, he said.

“Legislators have learned to ignore us forever. They don’t even give it a second look,” Cagle said.

“What they do give a look to is the fact there are 40,000 teachers not at work Monday and the legislators can’t force them back to work,” he said. “They can’t force us back because they don’t have that power.”